The year is 1944. The world is filled with chaos. The second global war holds the entire world in it’s grip of terror, creating hatred and fear along with countless numbers of lost souls. The agony and hatred of those souls summon the castle of evil. The castle that has appeared many times throughout history only to bring terror and destruction upon its surroundings, the castle of the dark lord, Dracula… The demonic castle.

Released on December 5th, 2006 for the Nintendo DS, Castlevania: Portrait of Ruin is the story of the partnership of Jonathan Morris and Charlotte Aulin, and their adventure into the depths of Dracula’s Castle. It is the year 1944, and Europe is in the middle of World War II. The Vampire Artist, Brauner, has revived Dracula’s Castle in order to bring ruin to the world, and it is up to Jonathan and Charlotte to stop him. Upon reaching the castle the pair are met with Vincent, a priest who was sent in order to assist in the destruction of Castlevania and who becomes the local shopkeeper, selling important items to aid their quest. While exploring the castle, they encounter a mysterious ghost by the alias of Wind, who is able to impart his knowledge and skills with the pair, while acting as a mentor towards Jonathan. Shortly afterward, the pair discover one of Brauner’s many portraits, used to control the castle powers. Understanding the composition of the Portrait, Charlotte is able to deduce that in order to sever the link and essentially weaken Brauner, they must enter the world inside the painting and destroy the evil within. The duo encounters several other portraits throughout the castle that they must venture into, each containing vicious creatures that will do anything to stop them. Jonathan and Charlotte also come across vampire sisters Stella and Loretta, who are said to be the daughters of Brauner, and part of the plot to resurrect Count Dracula. It should also be noted that Jonathan Morris is the son of John Morris, who was one of the heroes of Castlevania: Bloodlines. 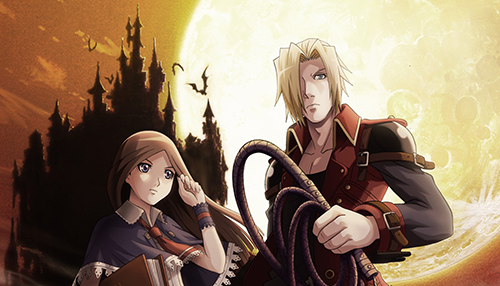 Castlevania: Portrait of Ruin is only the second game in the franchise that gives you the choice of 2 different characters to play as from the start. However unlike Castlevania: Bloodlines, you can alternate between playing as Jonathan and Charlotte whenever you desire. Both characters have their own unique skills and strengths which help each other many times in the game. They also have the ability to team up together at the same time, and in some cases this combined effort is required to advance to certain areas of the castle. Both characters can be equipped with weapons, armor, accessories, and more that you find throughout the castle and also purchase at Vincent’s Shop. Some of the items can only be used by a particular character, and some can be used by both Jonathan and Charlotte.

The castle layout is the popular Symphony of the Night/Metroid style that was successful on the Castlevania titles released on the Game Boy Advance and Dawn of Sorrow. Portrait of Ruin has excellent replay value as you are able to play as several different unlockable characters as well as Boss Rush Courses. Castlevania: Portrait of Ruin is another of the many fine releases from the franchise. It is a very addictive adventure filled with many challenging obstacles, and it is sure to be enjoyed by all fans of the series.