Sheer terror is at hand…

Now you’re in the misty midst of Dracula’s less than welcoming lair. There’s no place to hide, no place to run. The only direction you can go is “dead” ahead into the darkness that is Castlevania.

With the taste for sweet revenge on the tip of his fangs, the blood thirsty prince of darkness hungers for a succulent delicacy, and your throat is definitely on his menu. But before you reach this host of horrors, you must risk your neck against multitudes of unearthly evils that lurk around every corner. 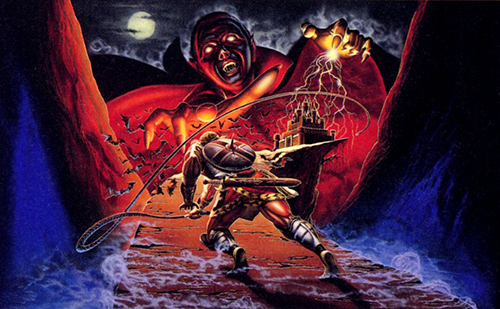 The graphics are the biggest change in the remake, as expected since the original version was released for the Game Boy. Like some of the old school Castlevania games, there is not a huge storyline or dramatic cut scenes. You basically work your way through all 6 stages killing anything in sight before you do battle with Dracula. Castlevania: The Adventure ReBirth costed 1000 Wii points, or $10.00, which was actually a bargain considering all that you got. And what you got was a classic throw-back Castlevania game reminiscent of the original NES titles. If you are a fan of the old style Castlevania games, or even if you are a newer fan of the series and want to see how it originated, this game is for you. Castlevania: The Adventure ReBirth is a challenging journey that should be experienced by any Castlevania fan who owns a Nintendo Wii. Playing the game will give you a better appreciation of the series and it’s history.