Transylvania – a small, peaceful country in the heart of medieval Europe.

The people of Transylvania whisper the legend of Dracula to their children at bedtime, only half-believing it to be true. “The forces of good keep a watchful eye over the land, protecting all who live here. But even during the constant vigil, the forces of evil manage to prevail once every century. Each time this happens, human beings with evil hearts begin to chant unspeakable prayers. This is Dracula, the Prince of Darkness, resurrected upon the face of the Earth. And each time he is manifested, his powers grow stronger.” Once, long ago, Dracula was indeed revived in this manner. However, his ambitions to plunge the world into darkness and build a kingdom of evil were crushed by the hero Christopher Belmont.

Following Dracula’s demise at the hands of Christopher Belmont, the Transylvanian countryside slept peacefully for 100 years. Then one Easter night, the townspeople were celebrating the joyous holiday with a splendid carnival. But, in the ruins of the old monastery on the edge of town, the followers of darkness were holding a Black Mass to revive the evil Count and give him eternal life. They poured a sacrifice of human blood over his remains. As they did so, an ominous thundercloud enveloped the town. Suddenly, a single bolt of lightning pierced the monastery. In that instant, Dracula, the Prince of Darkness, returned to this world to begin a new reign of terror.

But all was not lost. The successor to the Belmont family bloodline, a young man by the name of Simon, was determined to rid the land of this terrible evil. Taking the mysterious whip left to him by his father, he ventured into Dracula’s castle to face the Count….alone. 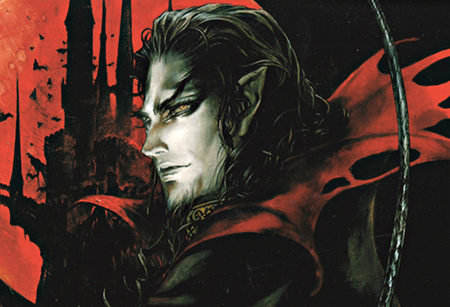 Released on October 8th, 2001 for the Sony PlayStation, Castlevania Chronicles consists of 2 game modes. First, a re-release of the 1993 Castlevania remake which was an originally available only in Japan on the Sharp X68000, and the second, an arranged mode which is a superb remake of the original Castlevania game with enhanced graphics to match the high demands of the average Sony PlayStation gamer. Whether you play either game mode the plot of both is to go through 8 stages of pure hell, until you meet Count Dracula for a duel to the death.

Castlevania Chronicles also has some great hidden features. First, an Art Gallery featuring beautifully designed artwork from Chronicles, Symphony of the Night, and the original ’93 Castlevania remake for the X68000. The Art Gallery can be unlocked after clearing all 8 stages of either game mode. Another bonus is an interview with the game’s director Koji Igarashi. Castlevania Chronicles is a great treat for the 15th anniversary of the franchise. It is an excellent game for the fans of the series who want to relive the moments of the original title, and also for newer fans to Castlevania who want to see how it all began. It proves that the legacy of Castlevania will live on forever.