A great war raged between Dracula and humanity. Just when it seemed that there was no hope for mankind to prevail, out of the darkness and despair, a champion arose, a true-blooded vampire hunter named Trevor Belmont.

Belmont and his comrades triumphantly slew Lord Dracula, a truly glorious victory for all. However, the evil one did not pass from this world in silence. With his final words, Lord Dracula left a demonic curse that enshrouded all of Europe in misery and torment.

Ravaged by hideous plague and dire famine, the people’s hearts turned black and murderous. The weak were slain without pity, while the land was pillaged and scourged without remorse.

Three years have passed since the death of Lord Dracula, and the invocation of Dracula’s Curse.

Take control of the devil forgemaster Hector, who is seeking vengeance for the death of his beloved Rosaly. Falsely accused of witchcraft, she was burned at the stake in a sham trial orchestrated by Isaac, another devil forgemaster still loyal to Dracula’s forces. Before you can make Isaac pay for his sins, you must journey across the cursed land of Valachia and make your way to Dracula’s Castle. Along the way, hordes of terrifying fiends lie in wait, attempting to make each battle your last. It will be a tough battle, but by harnessing the power of the Innocent Devils and weapons that you create along the way, vengeance may finally be yours. 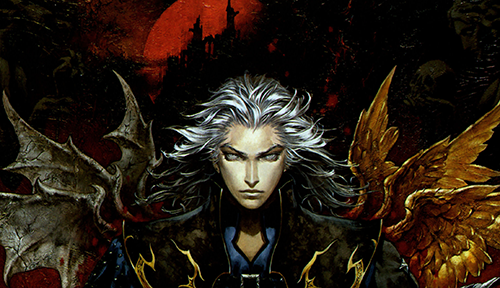 Released on November 5th, 2005 for the Sony PlayStation 2 and the Microsoft Xbox, Castlevania: Curse of Darkness is the tale of Hector the Devil Forgemaster, and his quest of revenge for the wrongful death of his beloved Rosaly. Hector once served under Count Dracula but defected to live among humans until Isaac, his former friend caused the death of Hector’s fiance, Rosaly. This was all part of a plan to lure Hector back into Dracula’s Castle, where Isaac awaits. Isaac believes that it is Hector’s fault that Dracula was defeated by Trevor Belmont three years ago, and has his own revenge plans in mind. Hector uses his Devil Forgery skill to create Innocent Devils, who aid him in defeating enemies and solving puzzles within the game. He meets a few others on his journey to battle Isaac. Julia Laforeze, a true witch that previously escaped the witch hunts, sells items and takes care of Innocent Devils that are not with Hector. She desperately wants for Isaac to be defeated. Saint Germain, a mysterious individual whose true motives are unknown. He wishes for Hector to stop his pursuit of Isaac…but for what purpose? Zead, a man that seeks to abolish the curse that is afflicting Europe. He wishes for Isaac to be vanquished so that the curse many finally be lifted. He constantly supplies Hector with information about Isaac and his whereabouts. And finally, making his return to a Castlevania game for the first time in many years is none other than the legendary Trevor Belmont, who destroyed Dracula and his evil forces in Castlevania III: Dracula’s Curse. Trevor returns to Valachia after hearing rumors of a devil forgemaster once again stirring chaos in land. But the question is, will he help Hector or try to destroy him?

Castlevania: Curse of Darkness is an action packed adventure that should provide hours of exciting game play. Although it is a 3D game, its style of game play is similar to that of Symphony of the Night. While Curse of Darkness is not the most popular or well known title in the franchise, it is still cherished by fans who have played it.