The year is 1830. In an ancient castle on the outskirts of the Austrian empire, a demon lord that would unite the powers of darkness was being resurrected at the hand of a fiend yearning for chaos.

At this demonic castle, Camilla, one of Dracula’s minions, began the incantation of a ritual to bring her lord Dracula back to life.

The vampire hunter Morris and his two apprentices, Nathan and Hugh, sensed an abnormality in the balance of nature and rushed to prevent Dracula’s unholy reemergence.

“That unholy monster must never return!”

However, they arrived too late to prevent Dracula’s return from his confinement. Dracula used his magical powers to imprison Morris, and cast Nathan and Hugh into a graveyard underneath the demonic castle. 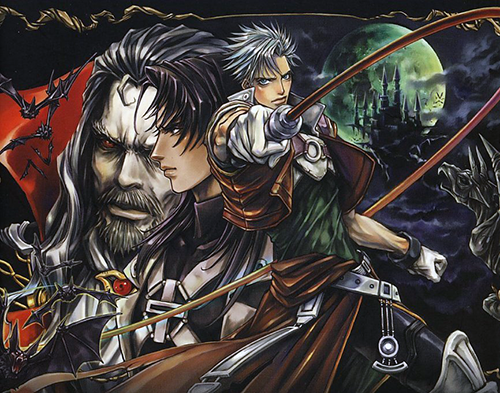 Released on June 8th, 2001 for the Nintendo Game Boy Advance, Castlevania: Circle of the Moon was the first game of the series since Symphony of the Night to portray the Metroid style format, a layout that has had continued success in the franchise ever since. The hero of Circle of the Moon is Nathan Graves, who along with Hugh Baldwin is an apprentice of the great vampire hunter Morris Baldwin. After the trio sensed Dracula’s return they made their way to Dracula’s Castle to prevent his revival, unfortunately they were too late. When they arrived in Dracula’s lair the Count destroyed the floor beneath the feet of Nathan and Hugh, causing them a great fall in which they barely survived. As Morris Baldwin remained with Dracula as a prisoner, Hugh Baldwin went off to save his father and told Nathan to leave the castle. Nathan wanted to ensure his master was safe and decided to remain, thus beginning his great adventure.

While Castlevania: Circle of the Moon resembles Symphony of the Night in many ways including the Metroid style map layout, collecting various armor and items, and gaining experience in order to level up, it also has several features which make it stand out in the series. One of them is the DSS Card system which gives Nathan weapon enhancements, increases in defense or strength, summon familiars and major monsters to aid, and much more. There are 20 different cards with endless combinations that Nathan can acquire after defeating certain enemies. COTM also contains the Battle Arena, a bonus area of the castle which consists of 17 rooms crawling with some of the most difficult monsters man has ever seen. The prize for making your way through the very difficult Battle Arena is worth a king’s ransom. The game does not have any item shop or Library, as seen in many other Castlevania titles. Instead you must rely on gathering potions, armor, and everything else you may need by defeating enemies which occasionally drop these treasures.

Circle of the Moon is probably the most challenging of the SOTN style games. The bosses, and even many of the standard enemies are so strong that you must have a high level of skill and experience to defeat them. The game contains one of the most difficult Dracula battles ever seen in any Castlevania title. Castlevania: Circle of the Moon is a very addicting adventure loaded with hours of action that has been enjoyed by Castlevania fans for many years, and will continue to be enjoyed for many more years to come.

Castlevania: Circle of the Moon