You’re Simon Belmont, bravest of the brave, boldest of the bold, a gothic warrior respected by kings. You earned your praise, not by crushing Viking invaders or Turkish hordes, but by destroying the evil Count Dracula in a duel to the death at Castlevania. But your victory proved painful, as the wounds inflicted during the duel slowly gnawed at your soul.

With a soft voice she warned that you were possessed by the Count’s curse. She said your only hope of destroying the curse and healing your scars was to find the five body parts of Count Dracula and burn them all in his Castle, ending forever the reign of the Prince of Darkness.

Suddenly, like most beautiful visions, she began to fade. And as you reached to touch her, she spoke her final words:

“Fear not, brave Simon, for if you have the courage to risk your life, you will find the strength to win again.” 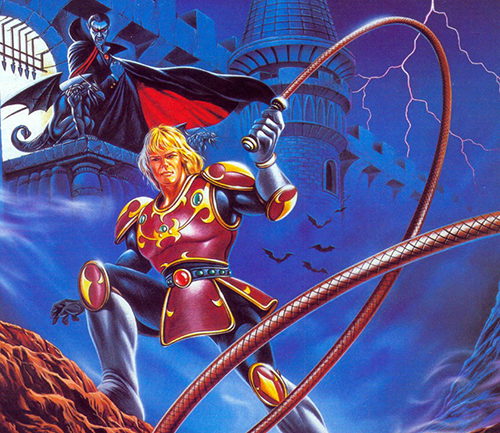 Released on December 1st, 1988 for the Nintendo Entertainment System, Castlevania II: Simon’s Quest was a follow up to the original Castlevania, but with an RPG twist. As in the first Castlevania, you play as Simon Belmont, and you now have the ability to gain experience points and level up. Simon’s Quest has many towns in which you can talk to villagers, and is filled with mansions and forests where Simon will do battle with the most vicious creatures known to man. Like a traditional RPG, you are able to visit any location in the game at any time you desire. Simon’s Quest is a fun filled, action packed adventure for Castlevania fans of all ages.

It is the year 1698, now 7 years after Simon Belmont defeated Count Dracula and rid Transylvania of all evil. Little did Simon know that a curse was placed on him by Dracula after their historic battle, a curse that if not broken will send Simon to an early grave. Simon is informed of this curse when he meets a mysterious young woman and discovers that the only way he can save himself is to resurrect, and then defeat Dracula, thus breaking the evil curse. Simon must set out to recover 5 of Dracula’s body parts which are needed to revive the Count, but Dracula’s minions have also returned and are again terrorizing people throughout Transylvania.

Simon knows that the time is now to venture to the towns within Transylvania, and talk to the villagers to gather clues as to the whereabouts of Dracula’s body parts. Armed with his trusty Vampire Killer Whip, he must go deep into the darkest forests and venture far within the realms of the deadliest mansions to do battle with Dracula’s evil servants in hopes of finding some way to revive and destroy the Dark Lord once and for all. Simon must go on a journey to free the people of Transylvania from the evil that comes upon them, and to break the deathly curse that is sure to destroy him, he must go on a quest to Castlevania…