It’s a cursed world we live in, thanks to Drac!

The time is 100 years before Simon Belmont’s birth. The moon burns red overhead and black clouds loom large on the horizon. All is still and quiet. Only the call of a distant crow stirs the cold night air. Suddenly, thunder roars out of the Morbid Mountains and into the village of Warakiya. Like the yell of an angry giant, the terrible sound shakes homes and shops as if they were sapling branches.

But no one blinks an eye. The village is dead calm. For all the people have fled after receiving warnings from the Great Beyond that Count Dracula has assembled a mighty army of evil, and they’re poised to march up from the Valley of Graveyards to bury mankind in a Tomb of Terror. Unfortunately, there’s no corner on Earth that won’t be gobbled up by this bloodthirsty legion of Swamp Dragons, Slasher Skeletons, and Forces of the Undead.

The last line of defense is you, Trevor Belmont – the forefather of Simon Belmont and the origin of the Belmont Warlord Chromosomes. But your chances are slimmer than Jim. In fact, the only real edge you have over this fang sharpened freak is your power to transform into three different partner spirits: Grant DaNasty, the ferocious Ghost Pirate. Sypha, the Mystic Warlord. And Alucard, Dracula’s forgotten son. Each of these spirits will confront you as you fight through 17 possible levels of never-ending fright, including the Haunted Ship of Fools, the Clock Tower of Untimely Death, and Curse Castle. You must also possess the strength to wield the mighty Battle Axe and Mystic Whip, which were given to you by the Poltergeist King.

So go forth young Trevor into the cold black night, where death lurks around every corner and evil lingers on every stone. And remember, if your courage and cunning are any less than magnificent or if you fail to choose the correct Paths of Fate, you’ll be banished to the world of the undead, and zombies will rule until the end of time. 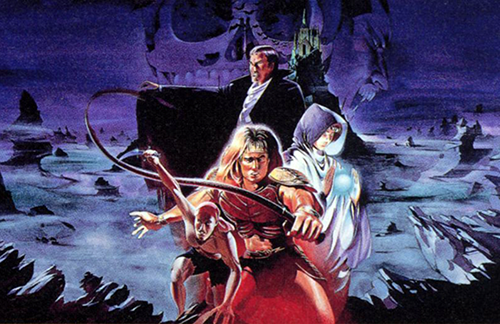 It is the year 1476, and Count Dracula has started to ravage Europe with an army of monsters as revenge for the death of his human wife Lisa, who was burned at the stake by the people of Warakiya after accusations of witchcraft. The Belmont family of vampire hunters, once exiled from Warakiya, are called into action by the Church. They feared the Belmonts’ “super-human” power, but with Dracula menacing to swallow Europe in darkness they are left with no choice but to call Trevor Belmont, current wielder of the Vampire Killer Whip.

Joining Trevor on his journey to defeat Dracula are Sypha, a great witch who was originally called upon by the people of Warakiya to defeat Dracula before she disappeared. Also Grant DaNasty, a former pirate whose entire family was killed by Count Dracula. And Alucard, the son of Dracula who has had enough of his father’s evil ways, and wants to help put an end to the terrorizing that most of Europe faces from Dracula’s minions.

The Curse of Dracula is upon Warakiya, and only a Belmont can stop the Count and his demons from slaughtering all mankind. Trevor Belmont is ready to face this atrocity and save Warakiya before it’s too late. To succeed in this Trevor must travel to where many have never returned, to where evil is lurking around every corner, to where courage and strength are a necessity, he must venture into Castlevania…