In an era long past, as monarchies weakened, local feudal lords grew in power. The first knights simply protected their lords’ domains. However, with the reforms of the late 11th century, knights became the protectors of the peace. They valued courage and honor, fighting heretics and heathens in God’s name.

In this age, one company of knights was said to be invincible due to two men:

Leon Belmont, a courageous man who feared nothing and whose combat abilities were second to none, and Mathias Cronqvist, a genius tactician, whose learning made him an exception in a largely illiterate society. They trusted each other completely, and they were bound by an old friendship. However, sorrow awaited Mathias upon his return from a victorious campaign. It was news of the sudden death of his beloved wife, Elisabetha. Mathias’ grief was profound and he became bedridden. A year has passed since then. Thanks to Leon’s efforts, their company remains proudly undefeated. However, a mysterious army of monsters suddenly appears in Leon’s domain.

The Crusades are raging in the East, and since the Church is focusing on fighting heathens rather than monsters, it has forbidden unauthorized battles. Leon wants permission to sortie, but the Church has no intention of granting it. One night, Mathias struggles from his sickbed and tells Leon that the appearance of the monsters is tied to a vampire, who has a castle in the Forest, called Eternal Night, and that Leon’s betrothed, Sara, has been kidnapped and brought to that castle. Leon realizes that he must renounce his title to rescue his beloved. The forest is swollen with darkness, as if it would rob away everything, and only moonlight provides a ray of hope. A great legend is about to begin. 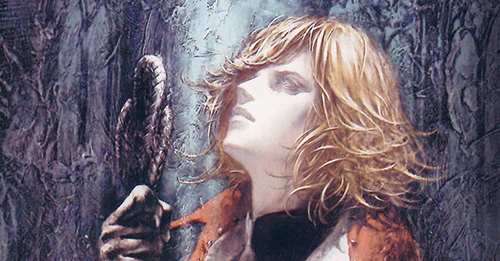 Released on October 21st, 2003 for the Sony PlayStation 2, Castlevania: Lament of Innocence is the tale of the beginnings of two powerful forces. First the Belmont clan, who go on to become well known vampire slayers setting out to rid the world of all darkness. And second, the evil force known as Dracula, who wreaks havoc on the innocent for many centuries to come. Lament of Innocence takes place in the year 1094, making it the earliest game in the Castlevania franchise, setting the story for the formation of the ongoing Belmont vs. Dracula battle. Since Mathias is bedridden, Leon sets out alone to the place known as Eternal Night in order to save Sara. On his historic journey he meets Rinaldo Gandolfi, who provides him a Whip of Alchemy to use in battle, and also acts as a merchant buying and selling various goods. Leon encounters many dark, fierce creatures who live among the night and serve their master, Walter Bernhard. Some of the darkest include Medusa, who turns her prey to stone with a simple glare from her eyes, Succubus, who can take the shape of any being, and Joachim Armster, a vampire who is being held prisoner in the castle and wants revenge against Walter. Joachim also has very important information to provide, but it comes at a price, one which nearly costs Leon his life.

It was inevitable that Konami would attempt to bring Castlevania back into the 3D realm after the not so popular games they made for the N64. Castlevania: Lament of Innocence was the first try since then, but this time it was done much better. The game seems to have been inspired by Capcom’s Devil May Cry, which itself was inspired by the Castlevania series.

Lament of Innocence has a simple format to many of the areas Leon enters within the castle. You enter and get locked in, do battle with some vicious monsters and even a boss, then when the area or room is clear, the door unlocks and you move on. Along the way you are able to travel through different rooms and corridors uncovering several secrets, along with many dangers that await you within the depths of the castle. The graphics turned out well in most areas of the game. The monsters look good, and playing them in 3D format gives you a better idea of how these enemies attack, and also provides you with a stronger sense of urgency to defeat them including some of the horrific bosses you encounter. The soundtrack is amazing, and some of the tracks are very intense and fit well with the challenges Leon faces throughout his quest. Like a traditional Castlevania game, Lament of Innocence contains many of the standard sub-weapons, but the real surprise is the damage that can be done with Leon’s whip and how realistic it seems. Leon can also use his whip to latch onto horizontal poles and propel himself forward.

Playing Lament of Innocence takes getting used to for the fans who prefer the 2D Symphony of the Night style games, however it is well worth the try as this game delivers in both the action and suspense categories, as well as it’s excellent storyline. Castlevania: Lament of Innocence was a groundbreaking game in the franchise, it helped transition the series into the 3D world while still allowing Konami to release the 2D games for other systems like the Game Boy Advance and DS, thus giving the Castlevania fan a choice. While Lament of Innocence had some faults, such as an occasional bad camera angle, overall it was a very successful release which paved the way for future 3D Castlevania games like Curse of Darkness.