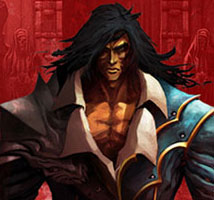 Trevor is the son of Gabriel and Marie Belmont. He was conceived prior to the events of Castlevania: Lords of Shadow, in the year of our Lord 1046, during one of Gabriel’s many long sojourns on behalf of the Brotherhood of Light and its fight against evil.

Pan and the elders of the Brotherhood believed Gabriel to be the chosen one who would one day ultimately defeat the Lords of Shadow and redeem mankind, but they also foresaw dark omens ahead. The world would be saved, although a heavy price would be exacted on all.

Pan believed that there was a possibility Gabriel himself might fall into darkness. More importantly, he saw terrible visions, portents leading to a dreadful fate for Marie and her newly born child. He therefore persuaded Marie to keep her child a secret from his father until Gabriel’s quest was done, and in this single act he saved the child from certain death. Marie, however, was not so fortunate.

After the death of his wife, Gabriel set forth on his quest to defeat the Lords of Shadow, unaware that he had a son by her. Oblivious to his fate, Trevor was raised by the Brotherhood to be a warrior like his father before him, and the secret of his birth and his lineage was kept from him until manhood. He proved to be a skilled warrior, and had inherited his father’s deep mastery of combat.

Evil begets evil, or so it is said. The elders saw in Trevor the final hope for redemption. A way to strike a blow against the dark forces now inhabiting the old Bernhard castle, an evil of their own making.

Therefore, Trevor was informed of his true lineage, the fate of his mother, and the true identity of her murderer, his own father; and so he sets off to the castle to seek revenge.

Trevor Belmont seeks to clear the stain upon his family name, to seek justice for his mother, and to face his father in single combat. However, like his father before him, events will conspire against him and fate has one more hand to play. 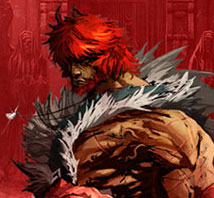 At the age of six, Simon’s parents were murdered by the forces of Dracula, and Simon was lucky to escape with his own life. Lost and alone, he was found in the forest by some of the mountain people. Simon was taken in and raised amongst them.

Simon never forgot what had happened to his parents and vowed to deliver vengeance one day upon those responsible. He trained hard and was extremely gifted in combat, yet life was hard for young Simon growing up. Always an outcast amongst the tribe, he developed a strong will and stubborn attitude that would always boil over into rage, and men soon came to fear him and his prowess in the arts of war.

He fiercely protected a fragment of mirror given to him by his father and always wore it around his neck for safekeeping.

Many years passed, yet the rage and yearning for revenge never left his heart. So one day he left the relative safety of the mountains and headed towards the land of his birth, to seek out the one they call the Dragon, to meet him face to face, and destroy him forever, little knowing that the curse of his family name would lead him into darkness and a terrible truth.