Pachinko is a very popular game in Japan, showing up in casinos and arcades all over the country. It is a cross between pinball and slot machines. Seeing as how Castlevania originated in Japan, and has always been popular there, Konami released Castlevania Pachislot on January 5th, 2009. Pachislot has 10 different Castlevania characters in the game, including Trevor Belmont, Dracula, Death, Medusa, Succubus, a Skeleton, and several characters from Curse of Darkness (Isaac, Saint Germain, and Zead). The 10th character is new to the franchise, a sorceress named Angela.

The game starts with Trevor going to Dracula’s Castle in order to defeat The Count, who had possibly been recently resurrected. Aiding him in his quest is the sorceress Angela, who is able to take down many enemies at a time and restore Trevor’s health and his will to continue to fight. Trevor also encounters the time traveler St. Germain on his mission. He encounters and battles Succubus, Medusa, Isaac, and Zead, who turns out to be Death. 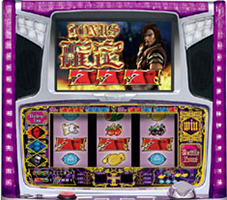 As a slot game, the basic goal is to get a set of three symbols to constitute a winning sequence. The symbols appear in the reel include red 7’s (featuring Trevor’s face), blue 7’s (featuring Dracula’s Castle), yellow stop-watches, watermelons with knives stuck in them, red/blue/black cherries, blue holy water, and a black devil forge master crest. The highest paying out set is three are three sevens. If the 7’s are of the same color, it is a big bonus worth 348 credits. If they are of mixed colors, it is a regular bonus worth 59 credits. The next highest set is two yellow-stop watches preceded by either a seven, devil forge master crest, or another stopwatch, which is worth 12. Three knife-impaled watermelons are worth 5 credits. There are 3 sets which are worth a single credit. These are 3 devil forge master crests, a red 7 followed by 2 black cherries, or 3 cherries, which can be of any color. 3 holy waters are worth a replay. Trevor battles and defeats Dracula as part of the storyline.