Castlevania Pachislot was a well received game in Japanese arcades upon it’s release in 2009. A sequel was released on July 20th, 2010 titled Pachislot Akumajo Dracula II, or Castlevania Pachislot II as those in the United States refer to it. Pachislot II features most of the same cast from the original game, which was based on characters from Lament of Innocence and Curse of Darkness. 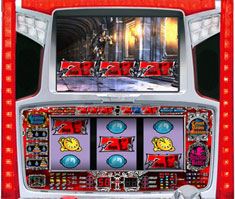 Pachinko is a very popular game in Japan, showing up in casinos and arcades all over the country. It is a cross between pinball and slot machines. You can click here and view the home page for the original Pachislot game for a better idea of the rules and game play. Many of Pachislot II’s mechanics are inherited from the first Pachislot game. The player (Trevor Belmont) progresses through a series of quick time events in which the outcomes are always determined by the score achieved on the slot machine. Failing to line up similar items on the slot machine results in Trevor being defeated by the current boss.

The goal of the game is to complete Zead’s challenges (fighting Succubus, Wyvern, and Dullahan) before battling Death himself, followed by Dracula. The other 3 characters in the game are Angela, who made her Castlevania debut in the first Pachislot, along with St. Germaine and Julia from Castlevania: Curse of Darkness.