Castlevania: Symphony of the Night is considered by many to be the most popular game from the Castlevania series. Konami decided to release a puzzle game based off of SOTN for the iPhone, and later for the Windows Phone, known as Castlevania Puzzle: Encore of the Night. The game was released on July 16th, 2010 in the United States, there was no Japan release. It is basically a cross between Symphony of the Night and the Puzzle Quest series, which are very popular and challenging puzzle games available on a variety of platforms.

Castlevania Puzzle: Encore of the Night tells the story of Alucard, son of Dracula, who is drawn to Dracula’s Castle to put a stop to his father’s reign of terror once and for all. However there are others who roam the castle, and not all is as it seems. The hero of the people, Richter Belmont, has seemingly turned to the dark side and Maria Renard is searching for answers. Even Death himself has a say in your fate. The layout of the castle is similar to the one in Symphony of the Night, and it includes the save rooms. In this game the Librarian acts as a guide, providing you hints on where to go next. Several enemies and bosses from SOTN have come along to prevent Alucard from defeating his father. 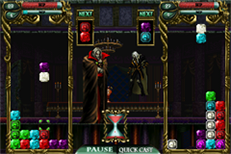 The monster battles on Encore of the Night are much different from any previous Castlevania title. An hourglass in the middle shows how long each turn is, and if whatever damage you have accumulated through matches and combos is dealt to your opponent and to you. But winning or losing isn’t simply achieved by filling up the play field. Your opponent’s HP must be brought to zero. As you fight bigger and badder bosses, you’ll need to attack with more vigor. If the play field gets filled and another attack is on the way (by means of blocks being sent to your opponent), then the game determines how many rows of blocks must be destroyed in order to accommodate the coming assault. The greater the number of blocks that are removed, the higher the damage. This means that huge comebacks are possible from either side. Aiding you are items, spells, weapons, armor, relics, and more that you can give to Alucard to power him up. Like the other Castlevania RPG type games, Alucard levels up the more enemies he defeats. Every time you level up you can allocate ability points to different stats like strength, stamina, intelligence, or luck. You can also allot points to different spell systems like Fire, Ice, or Holy. These spells can be used in battle with different effects.

Castlevania Puzzle: Encore of the Night was priced at $4.99 upon it’s release, however within a month it dropped to $1.99 due to poor sales, and by October 2010 it was down to 99 cents. Castlevania Puzzle: Encore of the Night tries to retain the feeling of being an action game like SOTN was. However with all the aspects of a puzzle game mixed in, this game seems to be more appealing to fans of the puzzle genre, than to fans who are looking for a Castlevania action/adventure game. For it’s cheap price, this game was still worth a look to any Castlevania fans who owned an iPhone while it was available to download. The game was delisted sometime in 2016, and is no longer available for purchase.

Castlevania Puzzle: Encore of the Night