The year is 1666. Dracula has returned to threaten the mortal world! Summoning all of the power of Hell, the Dark Countess of Castlevania has created a portal allowing Dracula to re-enter the material plane. Accompanied by foul creatures of the nether world anxious to do their bidding, Dracula and his lover intend to join forces with the goal of final victory over the Belmonts, and absolute dominion of the world! Their actions, however, have not gone un-noticed…

The twisting of reality by the Countess has upset the balance between good and evil, creating a rift that will ultimately plunge the mortal world into eternal chaos unless it can be sealed! To counter this, the forces of light decide to turn this power back summoning heroes from the Belmont clan from the very halls of time…. One from the past…one from the future!

The powers of light summon Sonia Belmont, legendary Belmont heroine drawn from the past and well suited to stand, not just against the sinister wiles of the Countess, but Count Dracula himself! Sonia has already been successful in defeating Dracula in the past. Can she defeat the combined power of both vampires?

From the future of the 1800’s, the powers of light summon Victor Belmont. A wandering gambler and soldier of fortune, Victor chose not to accept the Belmont legacy as a Vampire hunter by running away from home at an early age. During his travels Victor learned not just the art, but the science of warfare, all the while attempting to avoid his true destiny in the petty politics of 19th century Europe. But the blood of the Belmont clan cannot be ignored forever and Victor would eventually return to the land of his birth, a rebel and outcast. It is here that Victor is given the quest by the guardian of light to prove himself worthy of the name Belmont by battling Dracula and his evil mistress! 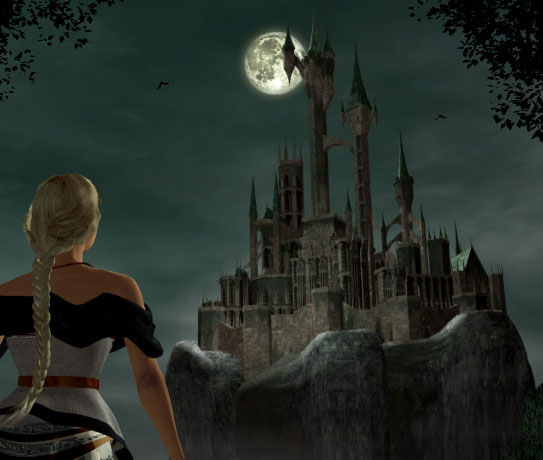 Unfortunately we did not get to witness Sonia and Victor’s battle with Dracula and the Countess as Castlevania: Resurrection was never released. The game was in development in the late 1990’s for the Sega Dreamcast. It was well along in production, possibly as much as 75% complete when it was canceled by Konami. No official reason was given for the cancellation, but it came as no surprise since the game had gone through a series of delays already. In June of 1999 came the first delay, stating the game would not come out until the year 2000. Rumors began to circulate that Resurrection was already canceled which prompted Konami to deny, and in turn announce a release for the game in September 2000. However in March 2000 on the same day that Sony announced the upcoming release of the PlayStation 2 console, Castlevania: Resurrection was put on an indefinite hold. Shortly after, the game was officially canceled by Konami.

Many speculated as to why Resurrection was canceled. Some thought it had to due with the failures of both Castlevania games that were released on the N64. However Resurrection’s art director Greg Orduya said it was canceled due to Konami’s lack of faith in the Dreamcast. Konami’s doubts proved to be accurate, as the Sega Dreamcast was discontinued in March 2001. Sega has never made another video game console since.

It was never revealed by Konami as to how the story of Resurrection was going to unfold. It appeared that players would have a choice of either Sonia or Victor Belmont, and that their stories would intertwine at certain points in the game. It may have even been a situation as in Resident Evil 2, where you could play the game again as the 2nd character to obtain their complete back story. A few demos of the game were released, along with many screenshots. Also Castlevania fans were lucky enough to be provided with a large amount of concept art from the game, despite it being canceled. Castlevania: Resurrection is still a subject among fans of the series. There are still many “what if” questions in regards to the game. Some wonder if Konami did the right thing by canceling it. Others think it was a blessing in disguise as it’s speculated failure, combined with the poor response received by both of the Castlevania 64 games could have hurt the Castlevania franchise severely. In the end we will never know what could have become of the legend known as Castlevania: Resurrection.