Fangs for the memories…

In the first Castlevania Adventure, the fearless vampire hunter Christopher Belmont fought toe-to-toe and whip-to-wing against the vampire king, Count Dracula. Belmont defeated the Count and destroyed his castle, but unfortunately Dracula used what remained of his magical powers to transform his body into mist, thereby making good his escape.

However, his powers were so depleted that he was left unable to transform into human form. The count decided to wait and rebuild his dark forces. Deep inside his black heart he swore revenge on Christopher Belmont and his family.

Fifteen years later, a ceremony was held in the town of Transylvania. The son of Christopher Belmont, Soleiyu Belmont, had come of age and it was time for the title of vampire hunter to be passed down to him. The ceremony was used to commemorate this occasion. All the citizens of Transylvania rejoiced, hoping that the father-son team of vampire hunters would bring peace to the region forever. 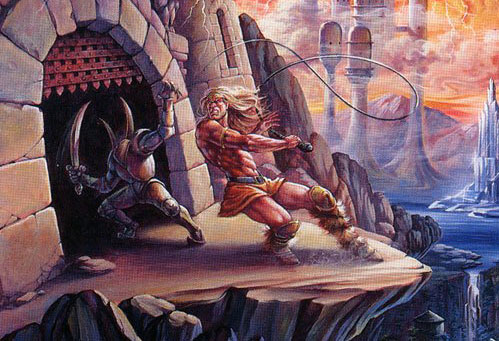 But on the morning after the ceremony it was discovered that Soleiyu Belmont had vanished into thin air. The ceremony was the chance Dracula had waited for. Soleiyu received great sacred power in the ceremony to mark his adulthood, and Dracula used his last bit of magic to turn Soleiyu’s powers against him, transforming him into a terrible demon. Then, aided by the Soleiyu-demon, Dracula was able to assume human form once again. That evening to the northeast of the village, the earth shook with a thunderous roar and four ominous castles appeared. And hidden in a lake at the center of these castles was another castle, the new lair of Count Dracula! Horrified to learn that his son had been altered by the forces of evil, Christopher Belmont determined to save Soleiyu and break the ambitions of the Count. He journeyed to the new castles, each ruled by a different power of darkness placed there by the Soleiyu-demon to stop anyone who would tamper with the mystic spell Dracula had cast upon him. Nevertheless, in order to save the village of Transylvania and free his son, Christopher had no choice but to go and fight once again.

Released in August 1991 for the Nintendo Game Boy, Castlevania II: Belmont’s Revenge continues the heroics of Christopher Belmont, which began on the first title for Game Boy, 1989’s Castlevania: The Adventure. It is the year 1591, and Christopher must venture back to Dracula’s Castle to rescue his son Soleiyu, who has been turned into a demon by Dracula as a revenge plot towards Christopher. Belmont’s Revenge differs from The Adventure in several ways, most notably are the 4 themed castles, Crystal, Cloud, Plant, and Rock, in which you can play in any order you desire. There is no advantage in which order you play the castles, and after defeating all 4 you then make your way to Dracula’s Castle. Another addition to Belmont’s Revenge are the usage of the familiar sub-weapons, which were missing from the previous Game Boy title.