Evil Lurks in the Darkness…

In the small country of Transylvania there is a legend which says that every 100 years the forces of Good mysteriously become weak and the forces of Evil gain a foothold into our world. The evil manifests itself in the form of one of the most feared characters to roam the earth – the vampire Dracula!

Every 100 years Dracula is revived and grows stronger and stronger. His goal is to turn all humanity into creatures of darkness, to be ruled under his iron fist. He has appeared in this world many times, and there are many people who fear that in his next appearance, he may be unstoppable.

There is one group that has always been around to see that Dracula is defeated, the Belmont family. For generations the Belmont’s have passed along the secrets and skills of vampire-hunting to the eldest child of the family. While many of the Belmont’s have lived peaceful lives without encountering Dracula, they remain prepared. There are occasional skirmishes with lesser monsters, but the Belmont clan has always emerged victorious. 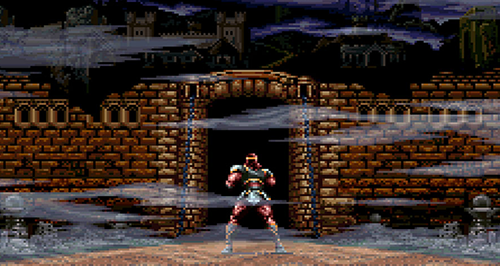 Now, 100 years have passed since the last battle between Dracula and the Belmont’s. Transylvanians are reporting mysterious sightings of odd creatures appearing under the cover of darkness. As Spring approaches, the citizens prepare for a traditional celebration.

Unbeknownst to them, an evil group of people is holding a ceremony in the old destroyed abbey outside of town, attempting to revive the Prince of Darkness. As they carry out their ritual a dark cloud descends over the countryside. The sinister group stirs itself into a frenzy of mysterious chanting and pagan dancing, then lightning strikes the abbey. The ground bucks under their feet, and the abbey walls shudder. Once again, Dracula is revived!

It is time once again for Simon Belmont to call forth the powers of good to aid him in his battle. Armed with his mystical whip, his courage and the centuries-old knowledge of Belmont family training, he sets forth on his mission . . . 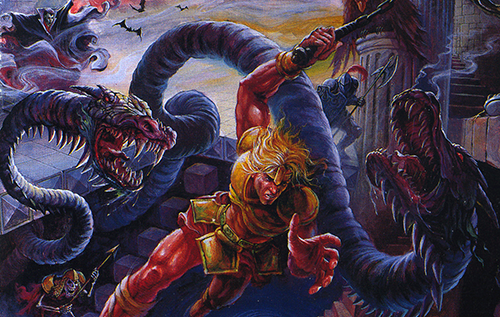 Released on December 4th, 1991 for the Super Nintendo Entertainment System, Castlevania made a successful transition from NES to SNES by retelling the story of the original game with better graphics and controls. Super Castlevania IV is not an exact stage for stage remake, but more of an updated, improved version. Most of the enemies and bosses from the original remained, along with some great new additions and an excellent soundtrack. Super Castlevania IV solidified the Castlevania franchise as a mainstay in the video game industry for many years to come.

It is the year 1691, Transylvania has been at peace for 100 years now, and the peasants and villagers have begun to purge their minds of the memories of the times when the lands were dominated by chaos and shadows, and when the undead walked the Earth. However Count Dracula returns every 100 years to plague the land, bringing with him the evil forces of hell, and it just so happens that the people of Transylvania’s time has run out. The Prince of Darkness has just returned to his ancestral home of Castlevania, and has called forth his minions to purge the world of human flesh.

The people of Transylvania cry out for a hero, a protector to defend them against the evil desires of Dracula. They do not need to look far as Simon Belmont, a descendant of a long line of Vampire Hunters lives within the land of Transylvania. Armed with a whip that he calls the Vampire Killer, Simon sets forth on a journey through the darkened countryside to rid the world of the ultimate evil, a journey in which he must fight his way through legions of Zombies, Monstrous Bats, and even Death itself, a journey which must end with a final showdown between Simon and the Dark Lord, a journey to Castlevania…