Count Dracula Prophesized to rise every hundred years, descending the world into darkness. But there are those who stand before the rising tide, heroes all.

After centuries of battle, Dracula’s Castle was finally sealed within the solar eclipse of 1999.

Count Dracula was destroyed, but then, one day…

Unknown to many, his true identity is Alucard, the son of Dracula.”

Within the envelope is a letter…

‘The Grimoire has awoken.’ ‘The darkness comes.’

Beset by doubts, Alucard diligently checks the moonlit sky to ensure Dracula’s Castle has not reappeared, before setting out on a journey to find the sender of the letter.

This is the story of the Grimoire of Souls, a new page of a tragic history. 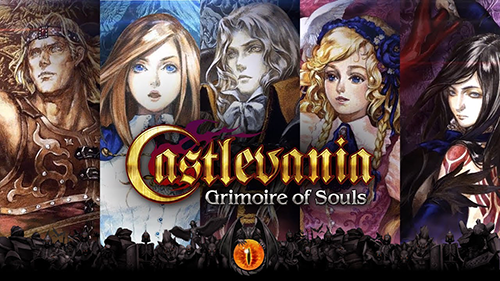 Castlevania: Grimoire of Souls was originally announced on April 17th, 2018 for Mobile Devices and went through an iOS closed-beta stage test. After the closed-beta test ended on May 22nd, 2018 the game was announced for an Android release in 2019. An official trailer for Grimoire of Souls was released in September 2019. Although no official release date was given, it seemed that date was finally coming soon. The game was given a “soft release” on Google Play Store on September 20th, 2019 with no advance announcement. But a year later the game was discontinued on September 9th, 2020 without ever having an official release.

However Castlevania: Grimoire of Souls was finally released on September 17th, 2021 to Apple Arcade. Grimoire of Souls is a 2D side scrolling game with quests that can be done in co-op with a second player. There are also multiplayer modes with up to 4 players. The game is not based off the Symphony of the Night style, and instead the original 2D style like Dracula’s Curse or Rondo of Blood. The game has multiple characters to play as like Alucard, Simon Belmont, Maria Renard, Shanoa, and more. The character’s artwork are from the original title’s that they appeared in.

Castlevania: Grimoire of Souls was the first new, original title released in over 7 years, and hopefully will lead to more Castlevania games soon.