The honeymoon is over before it has begun in Haunted Castle. Simon Belmont’s wife has been kidnapped by an evil Vampire. Fearing nothing, Simon boldly starts on a quest to find his missing bride. He begins his mission with a whip as his only weapon, but he can obtain a more powerful weapon, a chain or sword by destroying particular enemies.

Simon collects small and large hearts that appear after destroying certain enemies. The amount of hearts the player collects determines the number of times he can use a power-up item. 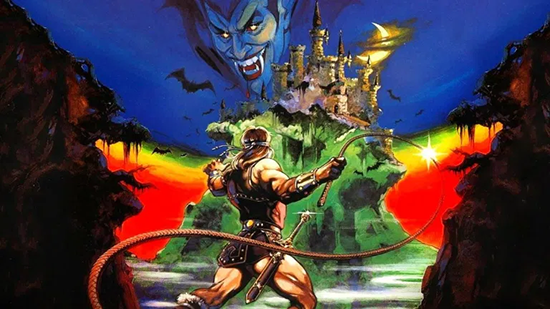 Released on September 22nd, 1988 in Arcades throughout the USA, Haunted Castle is an alternate version of the original Castlevania story. Simon Belmont has just married the lovely Selena, and as he and his new bride celebrated at the village church, terror struck. Suddenly the empty sky filled with dark clouds, and with a rolling thunder that shook the earth, Dracula once again awakened from his slumber. Asking for Serena’s blood, he flew down during the wedding and stole her away. Simon Belmont headed for Dracula’s demonic castle armed with only a whip, and determined to rescue his wife at any cost. Little did he know the horrific challenge that awaited him deep within the dark realm of Dracula’s Castle.

Haunted Castle was actually the 2nd Castlevania game released in the U.S. ahead of Simon’s Quest, however it was quickly forgotten. There were many reasons why the game was not successful, one being that Simon was too large and often appeared awkward on the arcade screen. Also his size made him an easier target for enemies. The game was extremely difficult due to the player only being allowed 1 life and 3 continues. Haunted Castle was also released in Europe and Japan where it fared a little better than the United States, but overall the game had very poor sales and vanished fast from arcades around the world. Haunted Castle does have a few positives, one being the soundtrack which actually gets better with each level. Despite Simon’s rather large look, the graphics are excellent and live up to arcade expectations.

Like Vampire Killer, Haunted Castle is one of those Castlevania games that many fans of the series have never even heard of. It is still a rare treat to own Haunted Castle on arcade, and despite all of the problems with the game it is still worth a try for the relentless Castlevania fan. Haunted Castle was included on Konami’s Arcade Classics Anniversary Collection in 2019 giving many fans their first opportunity to play the game.