It was the Middle Ages in Transylvania. One man came into possession of an evil power, and the Prince of Darkness was born. Before long, this being used his new-found supernatural powers and the magic powers of his followers to spread his plague of darkness and despair throughout the European continent. He was Count Dracula. Even to mention the name of this Prince of Darkness was to cast fear into the hearts of the people in the land, who were powerless to do anything save voice their concern. However, at about the same time a baby girl possessing special powers was born to a family living in a remote area of the country. “Your powers are meant for a higher purpose and not only for yourself,” she was often reminded as she was growing up. The plot of this girl’s fate began to develop one night in her seventeenth year when she met up with the young enigmatic Alucard, who was on a journey to search for the father that deserted him. The young girl’s name was Sonia Belmont, and she was the first of the vampire hunters in the Belmont family to become legendary. 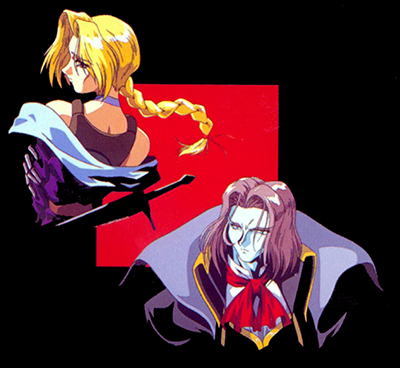 Released on March 11th, 1998 for the Nintendo Game Boy, Castlevania Legends was the first game of the series to feature a female, Sonia Belmont as the hero. It is the year 1450, the Dark Lord Dracula reached the height of his power having undertaken a dark transmigration from his human body which gave him the power to rule over all that was evil. He began to send out armies of the undead to conquer the nations of the world. Sonia Belmont set out to destroy the evil Count shortly after the time she met Dracula’s son Alucard, who had also just begun his campaign to stop his father’s madness.

Castlevania Legends is one of the most unknown titles from the series. The game has been removed from the official Castlevania timeline since it suggested that the child Alucard and Sonia Belmont had together was none other than Trevor Belmont, thus making the Belmont clan descendants of Count Dracula, something horrific to even joke about. The fact that Legends was released for the Game Boy also did not make much sense since Nintendo was only a few months from releasing the Game Boy Color, and a new Castlevania title would have possibly helped jump start sales of the system. Also in 1998 when Legends was released, it had been 7 years since the last Castlevania graced the Game Boy and the franchise never really had any success for that console to begin with.

Overall, Castlevania Legends is not that bad of a game. When compared to the other 2 Castlevania Game Boy titles Legends is a step back from Castlevania II: Belmont’s Revenge, but is much better than Castlevania: The Adventure. Sonia Belmont begins the game equipped with the traditional Vampire Killer Whip, and has 2 decent upgrades. First the Chain Whip, used in many games in the franchise, and second a whip which spews fireballs when used, which is something that comes in handy when attacking while climbing. As with Belmont’s Revenge, Castlevania Legends also uses passwords to get to any level in the game. Unfortunately the poor response received from Castlevania Legends started a downward spiral for the franchise that continued in 1999 with the 2 games released for the Nintendo 64. Luckily the Castlevania franchise was able to bounce back after the new millennium with great titles on the Game Boy Advance, PlayStation 2, and Nintendo DS.