Through the magic of the Ancients, this man-beast warrior has obtained a physical body of near immortality, and power that surpasses that of a wild beast.

The man-beasts, choosing to live in harmony with the humans, sealed away their enormous magical powers to prevent them from being used. However, through severe ascetic training, Cornell acquired the art of releasing the sealed man-wolf power.

Returning to his village after a year of ascetic training, Cornell finds the village engulfed in flame, and his only living blood relative, his sister Ada, kidnapped by evil spirits. Using his man-wolf’s acute sense of smell to track the scent of his sister’s blood, Cornell begins his long journey to rescue Ada. 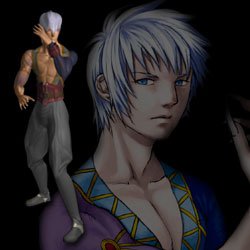 Released on November 30th, 1999 for the Nintendo 64, Castlevania: Legacy of Darkness is a prequel to Castlevania 64. Set in the year 1844, the game stars the man-beast Cornell in his quest to prevent his sister Ada from being used as a sacrifice to resurrect Count Dracula. The game opens as Cornell arrives at his village, which has been burned to the ground by Dracula’s minions. He finds Ada’s pendant in a doorway and follows her scent to Dracula’s castle. During the course of the game Cornell comes upon a grand estate owned by the Oldrey family: J.A. Oldrey, the master of the Villa, Mary, his wife, and Henry, their son. Gilles de Rais and Actrise have turned Oldrey into a vampire. At Mary’s request, Cornell guides Henry to safety. Later in life, Henry returns to Castlevania to save kidnapped children. Throughout the game Cornell encounters his rival and fellow man-beast, Ortega. Ortega has allied himself with Dracula to finally best Cornell in combat.

Castlevania: Legacy of Darkness was a continuation of Konami’s first attempt (Castlevania 64, also released in 1999) to create a 3D Castlevania series. It is officially referred to as a “Special Edition” of the original game, and more fully realizes the game designers’ vision. For example, Cornell was present in early development media and press information for Castlevania 64, but was ultimately removed before the final release.

At first Legacy of Darkness may appear entirely the same to a casual observer due to aesthetic similarities to Castlevania 64. However, Legacy’s primary focus is on a new story (a prequel to Carrie and Reinhardt’s adventures) in which Cornell explores new levels. Most of the old levels included in Cornell and Henry’s quests (such as the Forest of Silence) have been so drastically redesigned that they are essentially “new” despite the use of familiar textures from the original game. Old levels that have not been drastically changed (such as the Villa) are often navigated in a new or novel manner and feature different puzzles. Carrie and Reinhardt’s quests are a secondary focus, and can only be unlocked after completing both Cornell and Henry’s quests. Carrie and Reinhardt’s quests lack the voice acting and original level designs present in Castlevania 64, instead adopting the new designs. Their quests also feature new bosses. Legacy of Darkness is an overall improvement to Castlevania 64, however like it’s predecessor, it was still met with criticism by some fans of the series.