One year after the events in Aria of Sorrow, Soma is living peacefully, and believes that his powers have been lost. A woman who identifies herself as Celia Fortner, appears and summons several monsters. Arikado arrives to help Soma defeat the monsters, after which Soma absorbs their souls. Celia retreats, proclaiming that she will destroy Soma. Soma expresses disbelief at the return of his powers, but Arikado reveals that his powers were never lost, only submerged. He informs Soma that Celia is the head of a cult that seeks the resurrection of the dark lord. He leaves, instructing Soma not to pursue Celia. Soma, however, uses information acquired from Hammer to locate the cult’s base, a facsimile of Dracula’s Castle. Along with Hammer, Soma is also joined again by Yoko and Julius Belmont from Aria of Sorrow, as he enters Dracula’s Castle to stop the evil cult from bringing back the dark lord…

Released on October 4th, 2005 for the Nintendo DS, Castlevania: Dawn of Sorrow is a direct sequel to the Game Boy Advance hit, Castlevania: Aria of Sorrow. It is the year 2036, one year removed from the events that occurred in Aria of Sorrow. Soma has just realized that his powers were never lost, and that an evil cult plans to destroy him in order to resurrect Count Dracula. Despite being asked by Genya Arikado to stay out of the matter, Soma ventures back to Dracula’s Castle to put an end to Celia Fortner and her cult. He is joined by the same cast from Aria of Sorrow which includes Hammer, who sets up shop again in the castle to aid Soma. Yoko, who also sets up a shop in the castle where she fuses souls into more powerful weapons for Soma to use in battle, weapons that are much needed this time around. Julius Belmont also returns, working with Yoko to help stop the dark cult, and Soma’s good friend Mina Hakuba is back again as well. Soma’s abilities in Dawn of Sorrow are just as they were in his previous adventure, where he can still obtain souls from his enemies which make him even stronger during battle. He also has a variety of weapons and armor he can acquire during his adventure, making him a formidable foe to all who oppose. The castle in Dawn of Sorrow is just as dangerous as those from any Castlevania game, and Soma will encounter many challenges throughout his quest. 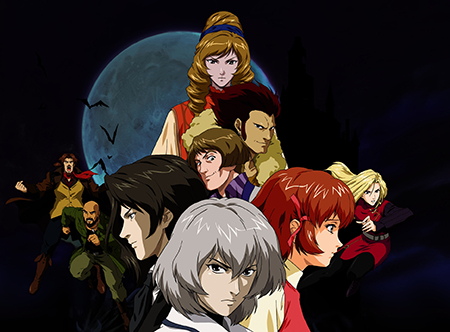 Castlevania: Dawn of Sorrow is the 5th title of the series to have the same aspects that began with Symphony of the Night, including the Metroid like castle layout, the RPG elements, as well as the ability to increase stats when equipping better weaponry and armor. This style of play has been very popular with the series, especially on the handheld games. After the success of Circle of the Moon, Harmony of Dissonance, and Aria of Sorrow on the Game Boy Advance, Konami was ready to transition the series to Nintendo’s new handheld device, the Dual Screen, or DS for short. Konami decided to release a direct sequel to Aria of Sorrow, which itself was a highly popular and successful game. Originally known as Castlevania: Soul Power, the game’s title was changed to Dawn of Sorrow upon it’s release as a play on the name Nintendo DS. Many of the first DS games released like Dawn of Sorrow attempted to integrate DS into their titles, like Resident Evil: Deadly Silence or Tenchu: Dark Secret for example.

Konami was taking a chance by technically releasing almost the same game as Aria of Sorrow, only 2 years later. However since it was on a new system with better graphics and an overall different feel with the Dual Screen play, the gamble worked out and Dawn of Sorrow was a smash hit. It went on to become one of the most popular games of the series in both the United States and Japan. It’s success paved the way for future DS titles, Portrait of Ruin and Order of Ecclesia. With Castlevania: Dawn of Sorrow, Konami made the transition from Game Boy Advance to DS with ease. Dawn of Sorrow is just as addicting as all the other SOTN style Castlevania games, and has excellent replay value where you can play the game again as 3 different characters. It is a must have for any Castlevania fan, and it will be enjoyed for many generations to come.