An evil Darkness had befallen the land, giving rise to sinister vampire legends. Until now the people of Transylvania had grown accustomed to their peaceful existence, secure in the knowledge that their famed hero, Simon Belmont, had sealed the fate of Count Dracula several hundred years prior. Wicked townsfolk, possessed by the Darkness conspired to revive the King of Blood….

It is the year 1792, a hundred years have passed since legendary hero Simon Belmont defeated the evil Count Dracula and sealed him away for what was supposed to be eternity. The people have long forgotten about the horror of the undead, which allowed a few depraved individuals to restore the Prince of Darkness to his former state, sleeping in his coffin by day and preying upon hapless victims by night. 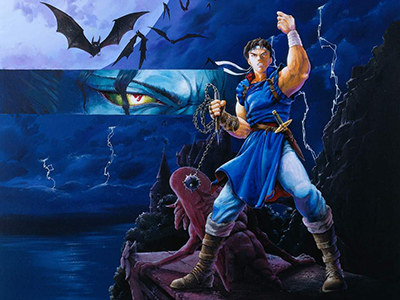 Dracula, now undead once more, plotted to exact revenge upon the descendant of the family that destroyed him… Richter Belmont. The Prince of Evil viciously attacked the town with his unholy legion. He snatched away Richter’s girlfriend Annet, and her sister Maria. Imprisoning them in his vile castle, he lives in wait for Richter to attempt a rescue. Richter, burdened by his destiny left for Dracula’s castle with his legendary ancestral whip, the determination to save his loved ones and the resolve to send Dracula to eternal damnation once and for all!

Released in September 1995 for the Super Nintendo Entertainment System, Castlevania: Dracula X has attained more of a cult following, and is not among the popular mainstream titles such as Dracula’s Curse or Symphony of the Night. This is mainly due to large differences between Dracula X and Rondo of Blood, which is the Japanese game that Dracula X was supposed to be based off of. In addition to the differences, the game play is overall more difficult, and was a step down from the successful Super Castlevania IV. But many still consider Dracula X to be a rare classic. It was almost impossible to obtain a copy of the game for purchase until it was finally released on the Wii U Virtual Console in 2014.