Fifty years have passed since Simon Belmont vanquished the curse of Dracula. Fate has dictated that Juste Belmont, blood descendant of the Belmont Family, hunt for the relics of Dracula. One day, Juste’s best friend, Maxim, who had been on a training expedition two years earlier, returned unexpectedly… his body covered with wounds. He informs Juste that Lydia, a childhood friend whom they both deeply care about, has been kidnapped.

Maxim has completely lost his memory of his time training away from home, and only has vague images of the kidnapping. Ignoring his bodily injuries, Maxim leads Juste to the place where he believes Lydie is being held captive.

Passing through thick fog, the two men happen upon a castle undocumented on any map. Could this be the fabled Dracula’s castle? Standing solemnly in the night, this forbidding castle welcomes its unexpected guests as the moonlight shines upon it… 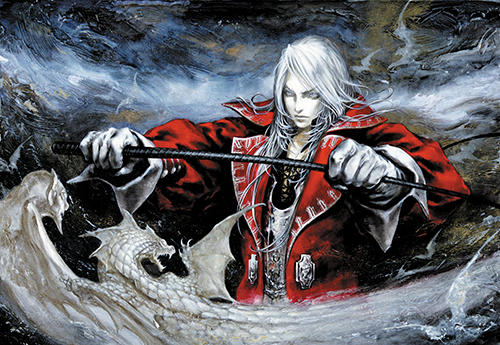 Released on September 16th, 2002 for the Nintendo Game Boy Advance, Castlevania: Harmony of Dissonance is the adventure of Juste Belmont, the grandson of the legendary Simon Belmont. It is the year 1748, fifty years after the events of Castlevania II: Simon’s Quest, and Juste’s good friend Maxim Kischine has returned from a training expedition badly wounded and with some terrible news. Lydie Erlanger, a childhood friend that both Juste and Maxim care deeply for has been kidnapped. Maxim has also lost a great deal of his memories over the past 2 years, but is able to lead Juste to the site of Lydie’s disappearance where they encounter a castle which had not previously been there. Juste goes ahead into the castle while Maxim stays behind to tend to his wounds, saying he will catch up later. While inside, Juste comes across Death, and discovers that this is none other than Dracula’s Castle. He also learns that Maxim had attempted to duplicate the actions of Simon Belmont by gathering Dracula’s remains, and planning to resurrect the Count so he could defeat Dracula himself. Juste must collect and destroy the remains of Dracula in order to save Lydie. However Maxim has been overcome by Dracula’s spirit, which could very well lead to the return of the Count, something Juste must not allow.

Like Circle of the Moon, Castlevania: Harmony of Dissonance follows the same 2D Metroid style castle layout that began with Symphony of the Night. The game also features the same RPG experience leveling up, and gathering various armor and items to improve your character’s performance. Harmony of Dissonance introduced Spell Fusion, which allows Juste to cast spells by combining certain Spell Books with his Sub-Weapons. It also features 2 castles, just like Symphony of the Night, except this time one is not upside down. Harmony of Dissonance improved upon Circle of the Moon by featuring radiant colors on the background of the castle, which improved game play on the handheld Game Boy Advance.

Harmony of Dissonance helped bring the franchise back from the post Symphony of the Night slump of the late 90’s. It restored popularity to the name Castlevania, and due to it’s success it allowed the release of many great 2D Castlevania handheld titles like Aria of Sorrow, Dawn of Sorrow, and more. Castlevania: Harmony of Dissonance is a must have for all fans of the series. It’s addictive style game play have established it as one of the more recognized games of the Castlevania franchise.